In 2021, Spotify launched Loud & Cleara resource for artists and industry professionals that breaks down the royalty system, the players, and the process.

Today, we’re publishing new and updated information and data — and figures from 2021 that show further meaningful progress towards a healthier and more diverse music industry.

Read on for our top ten findings.

1. We paid music rights holders more money than ever in 2021: $ 7 + billion, up from 5 + billion in 2020. That’s more than double what we paid out in 2017 ($ 3.3 billion) and represents a big part of the $ 30 billion we ‘ve paid to rights holders since our founding. Even adjusting for inflation, that $ 7 billion total is the largest sum paid by one retailer to the music industry in one year in history — including any single retailer at the height of the CD or digital download era. 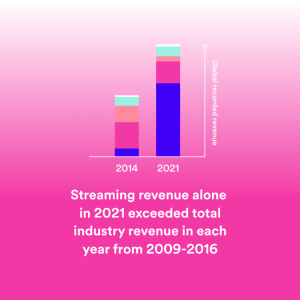 2. In 2021, recorded streaming revenue alone (across all services) was higher than the entire industry’s revenue from all forms of recorded music for each year from 2009 through 2016. When the music business hit its low point in 2014, it generated $ 14.2 billion from all parts of the recorded industry (streaming, physical sales, sync, downloads, performance rights). In 2021, recorded streaming revenue alone exceeded $ 16.9 billion — with Spotify leading the way. 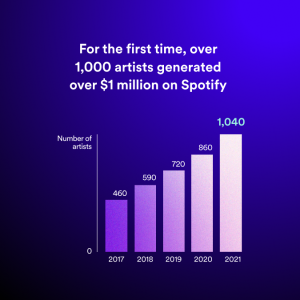 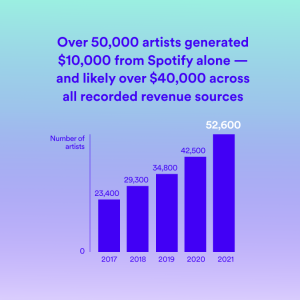 4. More artists are hitting milestones across all revenue levels, from $ 1,000 to million 5 million, and the numbers are accelerating fast. The number of artists who achieved each of these milestones has doubled since 2017. And when taking into account earnings from other services and recorded revenue streams, these artists are likely to be generating 4x these amounts from recorded music overall. For the first time this year, a diverse group of more than 50,000 artists — across different countries, genres, and career stages — generated $ 10,000 from Spotify and likely over $ 40,000 across all recorded revenue sources. 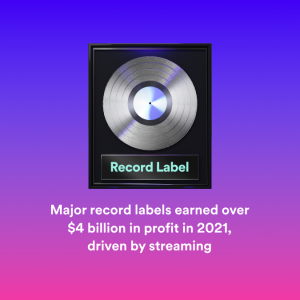 5. Over the past year, almost all of our music partners have reported record profit and growth for their artists. The three major music labels jointly brought in over $ 25 billion in revenue last year, with $ 12.5 billion coming from streaming recorded revenue alone. Spotify payments represent around a third of that streaming total. Major label profits in 2021 exceeded 4 billion — meaning more money to reinvest to grow the industry. 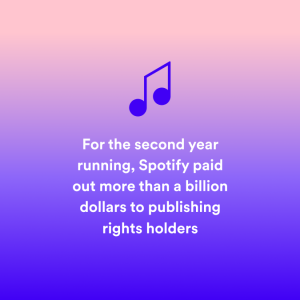 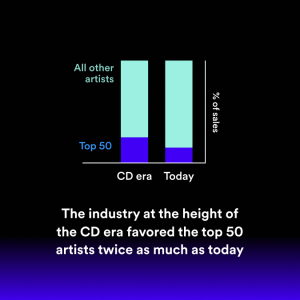 7. More artists are sharing in today’s thriving music economy than ever before. In the peak of the CD era, nearly 25% of US album sales were accounted for by the top 50 artists. On Spotify in 2021, only 12% of US streams were of the top 50 artists — meaning that revenue opportunities now reach far beyond the superstars. 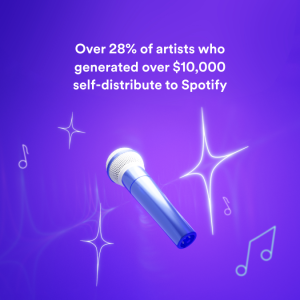 8. Many artists use distributors like DistroKid, TuneCore, CD Baby, or others to self-release their music on Spotify — and more than ever before, it paid off. Nearly a third (28%) of artists who reached 10,000 in earnings on Spotify released music through an artist distributor in 2021. These 15,150 artists represent a 171% increase since 2017. 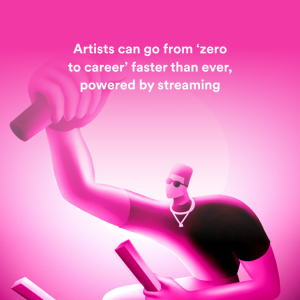 9. Streaming has lowered the barriers to entry to music and accelerated the path to finding a global fan base — meaning artists can go from first single to first significant paycheck fast. Over 10% of artists (5,300) who generated more than $ 10,000 on Spotify in 2021 released their first songs ever in the last two years. In 2021, 350 of them generated $ 100,000 from Spotify alone. 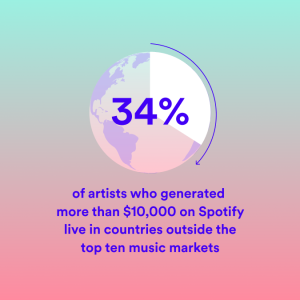 10. Streaming revenue is bringing real scale to the music industries of emerging markets, making it increasingly possible to pursue a professional career as an artist in countries around the world. In 2021, Spotify launched in 80+ markets, introducing these artists to new fans in places all over the world. Of the 52,600 artists who generated more than $ 10,000 on Spotify in 2021, 34% live in countries outside the IFPI’s top ten music markets (Australia, Canada, China, Italy, France, Germany, Japan, South Korea, the UK, and the US).

We’re excited to see progress based on these numbers, but there’s plenty more to do. As our CEO, Daniel Ek, shared, “Music matters. To the world and to Spotify. It’s where we started and what continues to inspire us as we build the most valuable platform for artists. We’re nowhere near done. ” Read more of Daniel’s letter on Loud & Clearin addition to resources detailing the diverse voices represented on platform, context from the industry at large, and reports and FAQs.